Refrigerators are among the most dismantled electronic equipment in Agbogbloshie if not the most dismantled. This is evidenced by the large numbers of the post-dis-assembly debris found all over the Agbogbloshie landscape. Data from Customs, Excise and Preventive Services (CEPS), Government of Ghana, on the import of EEE (all products) was obtained for the period 2006 to 2009. The records indicate that for the 4-year period, a total of 3,763,100 units of EEE were imported and refrigerators recorded the highest in 2009. They are used especially for the purposes of storing personal belongings and tools (see photos).

On the 5th of April 2014, the AMP team was onsite at Agbogbloshie for a refrigerator dismantling workshop. This workshop was a critical first, in a series of e-waste worker centered workshops that would be held in Agbogbloshie. The main purpose of these is to gain a deeper understanding of the process involved in the dis-assembly at Agbogbloshie, the tools involved, material components of equipment, and their prices at Agbogbloshie. Quite apart from this, they would enable us tailor the EEE manual, to suit the information needs of the e-waste workers and maker community in Agbogbloshie as well as interested STEAM workers.

The day before the workshop, Emmanuel, our design associate, aided by Mohammed, an e-waste worker, purchased a refrigerator.

The workshop was held in a space owned by Rauf. This was because, the team realized, it was going to be a more efficient use of its time to have it here, where there is already some degree of shelter, rather that erect a new one on the AMP site. In Agbogbloshie, the harsh noon day solar conditions, can make the high levels of pollution feel considerably worse. Hence the initial decision to build a new temporary shelter.

Zack (an e-waste worker) started by taking apart the doors, then the compressor, fan and all other components in the lower recesses of the fridge. Following this, he detached the outermost body, which is made out of steel. After these, he proceeded to remove the evaporator fan, evaporator coils and other components in the freezer section (See image Workshop photos). Now all that was left was a large open chest, comprised essentially of polyurethane foam (which he proceeded to remove next) and the plastic inner lining of the refrigerator. In the final stage, the doors were dismantled, by unscrewing and detaching their inner plastic components from the steel outer casing. All the dismantled parts were then photographed (see Parts of a refrigerator).

Subsequently, Andrew (from Afrimakers) made a video, in which Zack shared his knowledge in the local dialect (Dagomba) and English, on the dismantling process. This would be the first of many such local dialect explanatory videos.

Here a few discoveries that were made

The day ended with a barbeque on the AMP site (see AMP barbecue). In line with the dictates of Islam, the goat was prayed over and slaughtered by an Imam at the market and transported to the site, where some e-waste workers (2 in number, supported by several others-about 6 others) aided in its preparation. When it was all done, a number of the e-waste workers came over for the feast and this helped the team bond with a number of them. 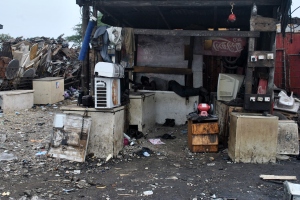 One thought on “AMP workshop – dis-assembly of a refrigerator”