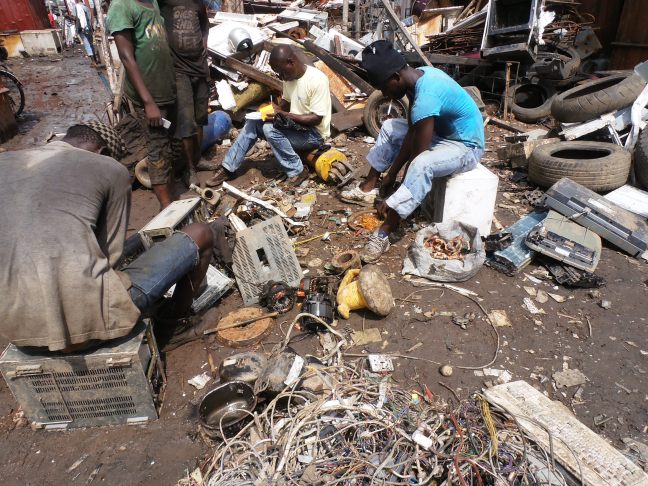 Agbogbloshie has suffered incredibly from the single story syndrome, imposed on it by the media and those with the opportunity to tell its story. Beyond the e-waste, the burning and the hardship, that usually characterises the gruesome descriptions of this urban enclave and its surroundings, there are several industries and practices within this urban site that gives it the kind of rich urban flavour that the space has. One major way of way of dealing with this threat of the single story, is to engage directly with a people. To see through their eyes and to feel what they feel. At AMP, we have made it our lifetime goal, to change first, the story of Agbogbloshie, for “he wields power over you who tells your story”.

In the last few months, the AMP team have sought to hear the stories of e-waste workers in Agbogbloshie through the use of interviews. For us, these are the voices that should be heard. It is our primary aim, through these interviews, to give a voice to the voiceless, to inform the E-waste workers and invite them to be a part of the AMP makers collective. The team recruited and trained two of the e-waste workers (Sam & Iddrisou) to help with the process and they have been engaged in all AMPs activities for the past five months. They participated fully and performed tasks from translation to administering the questionnaires themselves as well as photographing the work spaces of the interviewees. As part of the interview process the team continued to map the e-waste landscape, this time, with specific reference to the interviewees and the location of their workspaces. From this data a detailed map of the Agbogbloshie ecosystem is being constructed. The process is helping the team better understand the working conditions of e-waste workers, the various relationships that exist between them, their future aspirations and the nature of the Agbogbloshie site itself. Hopefully, this will help the team better integrate their needs into the project. So far, over 500 workers have been interviewed. The interviews, which started in May 2014 and are still ongoing and have four main areas of interest:

So far, certain patterns are beginning to emerge- majority of the population in Agbogbloshie are from the Northern part of Ghana especially towns and villages near Tamale, the lingua franca of Agbogbloshie is Dagbani, though some have good command of the English language, majority do not. Most of them dropped out of school at the Junior high school and primary (P5 & P6) levels.

E-waste workers engage in various forms of purchasing of equipment, disassembly, weighing and sale, and provide several tons of urban mined materials like copper.  There are also many industrious and entrepreneurial individuals who make highly useful objects. Indeed, Agbogbloshie is more than just an e-waste dump. During the survey we took  photographs  of some of the activities that go on in the yard and here is a field note.

Despite all of these very positive aspects of Agbogbloshie, there still remains the blight of filth and cable burning which means the risk of contamination and disease are highly pervasive. In general, there is a fair level of awareness about health risks amongst the e-waste workers. Thanks to the ubiquitous media coverage of that specific issue, e-waste workers are at least vaguely aware of the adverse effects of burning on their health. They however said that since it was their job, they felt as if they had no option than to do it. In reaction to this discovery on health, the AMP team have designed a utility shirt for the workers. When the second prototype of the utility shirt (the spacesuit) was showed them, e-waste workers insisted on the face gear (with possible embedded gas mask). It was observed that, workers in Agbogbloshie start their day early with the cart pushers, moving out early in the morning to source electronic equipment. Our discoveries provide us with information about Agbogbloshie but this is helping us understand the workings of informal communities, and people who are surviving on the “peripheries” of our awareness and yet contribute significantly to our lives. More than just an e-waste dump, Agbogbloshie is a huge open air manu-factory.

As announced in a previous post, the idea here is to recycle old TV cases to create a soilless agriculture in Agbogbloshie.

Here are the different steps to create a Re-vegetating TV.

Put sand and soil in a TV case so it allows plants to grow in a “healthy middle”.

The idea here is to protect plants from acid rain and to create a water reserve.

We use for that corrugated iron (easily findable on site) to separate two different areas. Water so will be filtered. 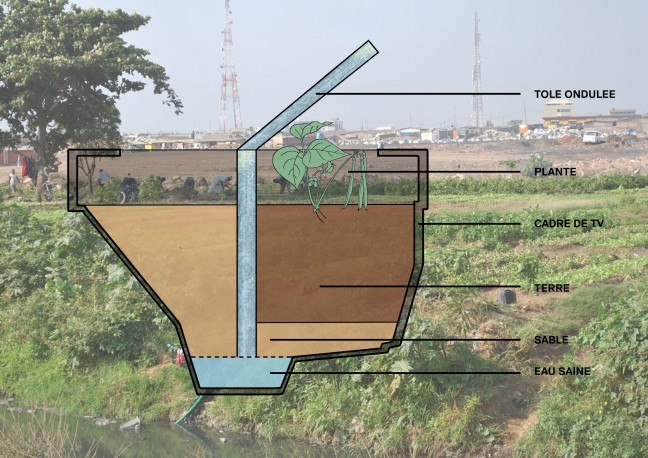 To complete the TV case, we add it a water pump made with iron tubes.

Easy to make, it will allow farmers to pump “healthy” rain water to water plants. According to seasons, that TV case will be self-sufficient to grow plants.

Here is a “blueprint” of how to use the water pump.

Vegetation in Agbogbloshie is a real problem because of earth pollution.

We can see that it lost around 90% of its surface in a decade.

So what can we do to re-vegetate Agbogbloshie and allow healthy agriculture? 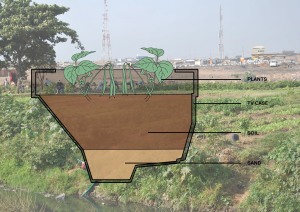